I haven’t been able to photograph anything let alone post something for all my wonderful blog followers since Easter! I apologize for my absence. It has been a very busy few months for me. I have some very exciting news to share with you all! I have officially accepted a position as a studio photographer for Kimberly Clark in Neenah, Wisconsin. My first day is June 1st, and as you can imagine I have been working hard to go through the motions of a new hiring process, while working full time, house sitting, and attempting to find an apartment in my new city as well as organize my belongings to make the move! Needless to say, I’ve been kind of running around like a chicken with it’s head chopped off.  I had my last day at my job at Period Paper, a bittersweet moment. There are so many special people I have met working there and it is such a unique company. I will really miss it, but I am onto something exciting and I can’t wait.

Now that I have some spare time I decided the first thing I would do is continue with a mission I created for myself way back in probably March. Way back when my mother gave me an ebelskiver pan for my bridal shower.  I suppose I should explain exactly what an ebelskiver is because you are all probably thinking I am some sort of crazy who just makes up words. Ebelskivers are a danish creation which is essentially a miniature pancake created from a special welled pan. Legend has it that the Vikings would return from battle and would be limited in their choice of foods and supplies to cook with. It is said that they would place their damaged shields over a hot fire and cooked pancakes in the indentations.  It is now a traditional treat that are often served during holiday gatherings and other family events. The special pans used to cook the pancakes are often family heirlooms passed down throughout the generations.

While living in Missouri Chet and I used it only once, not because it wasn’t awesome, but because we didn’t have very many recipes to try with it. Four years later I walked into Williams Sonoma  and saw what appeared to be some sort of delicate glow coming from their cookbook section. The glow drew me in like a tractor beam and my hands reached up and pulled out  a small book entitled Ebelskivers–filled pancakes and other mouthwatering miniatures by Kevin Crafts.  I poured over the book drooling at the endless possibilities that I had been looking for regarding my ebelskiver pan. This unfortunately, was a time that my bank account was rarely 10 dollars above the red, so as tempting as the mere twenty bucks this little gem would set me back I decided (begrudgingly) to slip it back into its place on the shelf and walk way dreaming of the little pancakes.  Sometime later, after Chet and I both sustained viable incomes I decided to order it online.

Back to my mission. So this book which I highly recommend to you all, contains more than 40 recipes for sweet and savory versions of the traditional danish ebelskiver. My challenge is to make each recipe and photograph it.  These guys are tricky to make and I still haven’t perfected the technique, in fact I’ll have to be honest and say that my husband Chet has done all of the actual cooking of the pancakes. I just made the batter and fillings. So I present to you Salted Caramel-Pecan Ebelskivers.  I’m not going to post the recipe, but instead demand that you run out and buy this book and an ebelskiver pan. It has such a rich history and are a lot of fun to make and even better to eat. Enjoy!

This is a smaller version of an ebelskiver pan with only 7 wells versus my larger 12 wells. After buttering the wells, you put a small amount of batter down, followed by your filling, and then top it off with a bit more batter. Let them cook like you would a normal pancake, flipping after they pull from the pan edges and bubble over the surface. 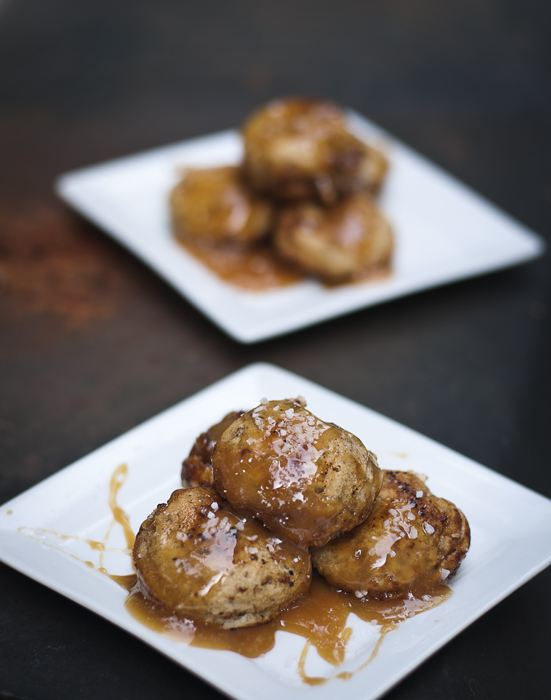