I am attempting to use the time during the weekdays that I don’t work at my second job to create photo sets and photograph products or food. This is in hopes to create enough images that come my mid-program review in the spring, I will not be running around like a chicken with my head cut off because I waited until the last minute to build some solid material.

That being said, I had a small get together a few weekends ago, and it seems without fail that when my husband and I throw shindigs there is always a multitude of drinks and beer left in our fridge. We don’t really drink much in our household so they end up sitting around waiting for the next party, or for the rightful owners to come claim them. I noticed a 6 pack of Smirnoff Ice-Pineapple flavored vodka and thought I could do something neat.

I lit the bottles from below using a glass plate Chet brought home from work as a surface. Then I bounced a light off my bedroom wall to create the high key background. I used reflectors and fill cards to create more light in some of the shadowed areas on the front glasses. There was no light coming from the front of the bottle. Then I used real pineapple slices as “garnishes” for lack of a better term. The light coming from underneath the bottles made a really interesting glowing effect within the pineapple slices, and the placement of it on the neck of the bottle made me think of an orbiting space like object.

Overall, I think this was a successful image for something that I just whipped up from the materials I already had at home. 🙂 Though I do feel in the white space (thanks to Holly for the idea) there should be in big bold yellow letters the words DRINK RESPONSIBLY…like those ads you see in the magazine. Maybe someday…when I’m famous…and people actually do put my work in magazines, not just on blogs. 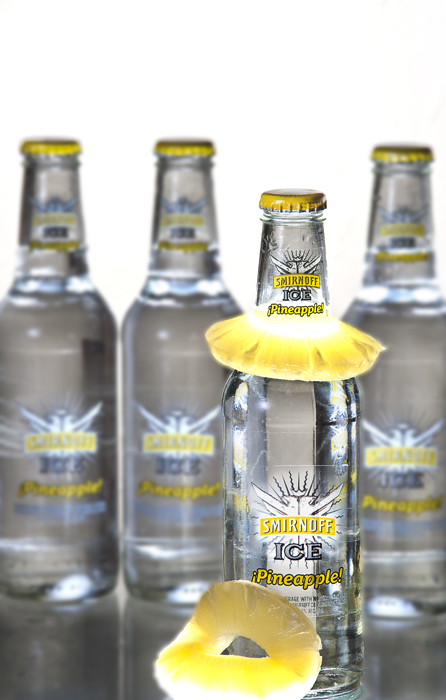